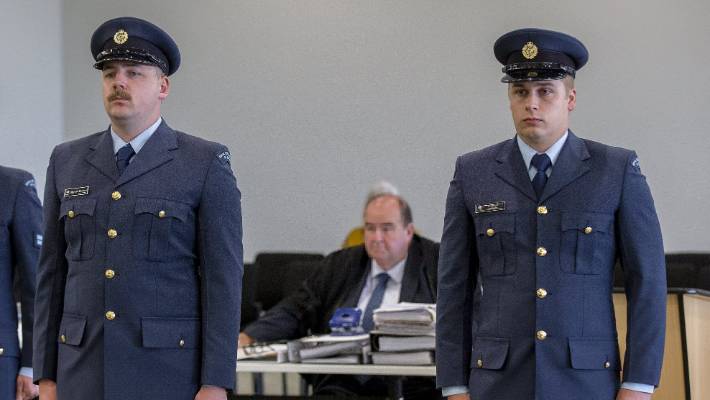 A court martial military panel has found one air man guilty of offering and consuming methamphetamine and acquitted another of trying to buy the drug.

On Monday, Davies pleaded guilty to eight charges of offering and supplying MDMA, two of consuming MDMA and one of consuming ketamine.

He entered not-guilty pleas to a charge of offering meth to Fairbank on October 1, 2016, and to consuming meth on March 4, 2017, but the panel of military members found Davies guilty on both charges.

Fairbank pleaded not guilty to trying to buy meth off Davies and the panel of military members returned a not-guilty verdict for this.

He pleaded guilty to two charges of offering to supply MDMA and a charge of trying to buy MDMA from Davies.

Vanderkolk said Davies clearly distinguished between the types of drugs he consumed on March 4, which showed he not only knew what he was talking about, but he knew what he had taken.

He said the Misuse of Drugs Act didn’t distinguish on quality – it distinguished on the type of drugs.

Davies’ lawyer Steve Winter said evidence given earlier in proceedings showed how there were variations among drug users about what drugs were called.

“Given that speed itself is its street name, there can be some unrest about what drug is being talked about when they purchase speed.”

Defence lawyer Paul Murray said Fairbank accepted he tried to obtain a drug, but didn’t accept it was meth.

“If you think it may have been something else, Aircraftman Fairbank is not guilty.”

Murray said evidence given earlier showed it was possible when people were referring to certain drugs they might not actually know what the drugs contained.

A scientist who tested white powder found in bags in an airman’s room said two bags had traces of meth inside them.

He said amphetamines and methamphetamine were similar looking and, in smaller amounts, it was virtually impossible to tell the difference by looking at them.

The two drugs would have to be chemically tested to determine the difference.

Edwards also said the drug referred to as “speed” was not a specific drug and could be amphetamine or methamphetamine.

Inside the bags was a mixture of white powder residue and small green plant materials, as well as a small glass spoon, a straw, razor blades and electronic scales.

Prosecutor Flight Lieutenant Conor Donohue said in October 2016, Fairbank text Davies asking if he could supply him drugs for the following week, naming different types of drugs he was after.

Davies replied saying he could not get MDMA, but could get “movies”.

Fairbank asked what that was and Davies replied it was “speed”. Fairbank said he would like to buy some and Davies confirmed the price, which was $100 a gram.

Donohue said a search of Davies’ phone showed on March 8, 2017, he sent text messages to a civilian who asked why he was unable to talk at an earlier date.

Davies said it was because he “was so out the gate”. The civilian asked what kind of drugs he had been on, to which he replied saying speed, MDMA and a cocktail of other drugs.

Donohue said the prosecution believed the mention of speed was a reference to meth.

Winter said Davies was a low-level drug dealer to his colleagues and others.

He said at no point did Davies knowingly buy, sell or offer to sell meth.

Winter said it would be submitted to the court martial panel that there were other options more likely than the Class A drug methamphetamine, and the prices in the text were not indicative of meth.

Fairbank would have pleaded guilty to a charge of buying amphetamine.

The pair are appearing in front of Judge Duncan Harvey and a panel of six military members. The court martial continues.