One tense moment during the court martial of a St. John’s soldier shows charges against the young man are baseless, his defence lawyer says.

Canadian Armed Forces Master Cpl. Gregory Young is facing two charges of ill-treatment of a subordinate, with one of the charges based on allegations that he forced a trainee to eat vegetables until he vomited.

As testimony came to a close on Tuesday, there was a problem with that accusation — nobody has testified that the young man vomited.

While questioning a defence witness, the prosecution referred to testimony from witnesses that a trainee in the Basic Military Qualifications course vomited vegetables into a garbage can. 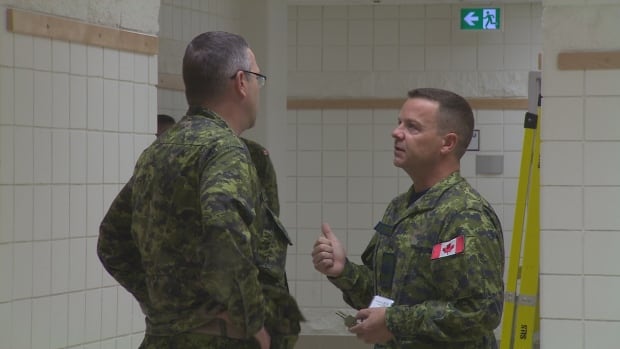 The defence lawyer rose from his seat with a puzzled smirk on his face.

“Objection, your honour. No one said that,” he said. “That’s not true.”

After looking over her notes from past testimony, the judge agreed. She then asked the prosecutor to change his question to remove the words “vomit” and “throw up.”

According to Young’s lawyer, this insistence shows the weakness of the prosecution’s case.

“I think that moment right there says it all,” he told CBC News after witness testimony came to a close.

The court heard from three witnesses on Tuesday — all trainees who were in direct line of sight during the so-called “vegetable incident.”

The witnesses each described the alleged victim as a fellow trainee who had a distaste for vegetables.

One day in July, after a hard day of course work, the trainees were in the meal line while Young served them supper.

‘He did not throw up. There was no vomit.’– Ivy Hawco,

After he finished serving, he came over to the young man, who still had all his vegetables sitting on his plate, and told him to finish them.

“It was kind of a joking manner,” said Gabriel Jenkins, the second witness called. “It was not a stressful environment at the time.”

All three witnesses said the young man was laughing as he put a spoonful of mixed vegetables in his mouth, made gagging sounds and spit them into a garbage can.

“He did not throw up. There was no vomit,” said Ivy Hawco, the third witness.

Some said the scene was jovial, with other recruits cheering the young man on. One witness said it was uncomfortable and felt “wrong or misguided.”

All three defence witness said the mood was light with trainees laughing and cheering him on.

The second charge related to an incident where trainees were allegedly forced to drink excess amounts of water.

On Monday, a witness testified she got a stitch while on a run. Throughout the day afterwards, trainees were forced to empty their canteens each time they took a water break and fill them up again.

All three defence witnesses could recall the day and said they were told to drain their canteens during three water breaks. However, they said they had unlimited time to drink the water and did not feel forced to finish it all.

The water consumption charge was later dropped by the court. 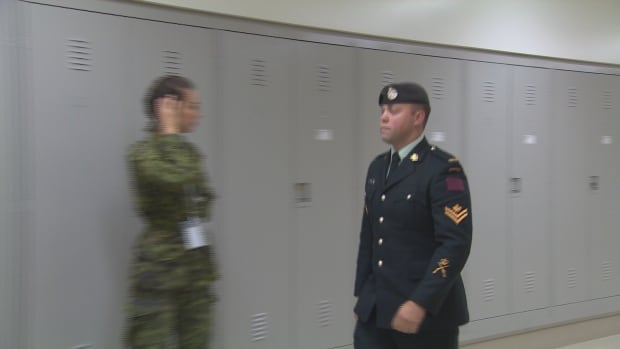 Master Cpl. Greg Young during a break at his court-martial in St. John’s. (Zach Goudie/CBC)

After the proceedings, Young’s lawyer told CBC News the court martial is costing the federal government around $60,000. Two witnesses on Tuesday were flown in from Prince Edward Island. Lawyers, judge and staff are being put up in the Sheraton and have rental cars, he said.

He says the charges against his client are heavy-handed. It is not clear who filed the complaint against Young, but the private at the centre of the vegetable incident has chosen not to participate.

Lawyers were to be back at the base at 3 p.m. for closing statements. A judgment is expected Thursday.