A Fort Gordon military panel handed down an acquittal Wednesday to a soldier accused of shooting at a group of fellow soldiers at a barracks complex this winter.

The government alleged that Pvt. Powell fired a gun at the room where Spc. Leslye Hampton, Spc. Natasha Bess and Pfc. Tamara Young were Feb. 28.

Ms. Jones said the soldier was sentenced to the 87 days he had already spent in military confinement and was given a $500 fine and a reprimand.

Under military law, two-thirds of the panel had to agree in order to find Pvt. Powell guilty of a particular charge.

“They’re a bunch of storytellers,” said Capt. Michael Waddington, Pvt. Powell’s military defense attorney. “And they told those stories, a bunch of which are ridiculous.”

Capt. Mary Higgins, a prosecution lawyer, told the court that despite this, the evidence supported a conviction.

“The defense wants you to believe this is all a result of shoddy police work,” she said. “The evidence is clear: There was a soldier with a weapon.” 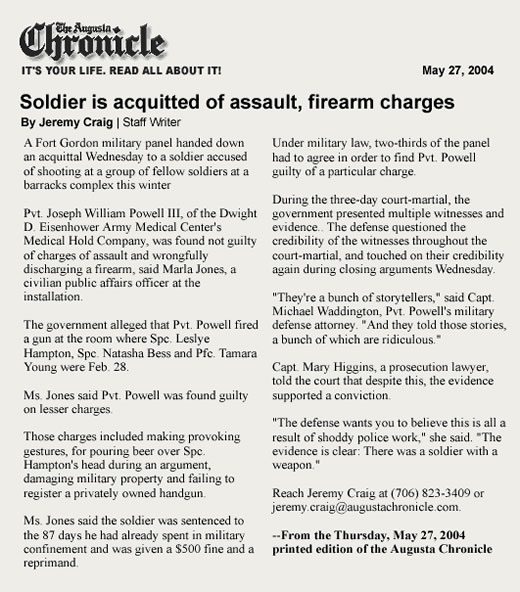