The remaining definitions are the same as those set out in Section 1.3 above. 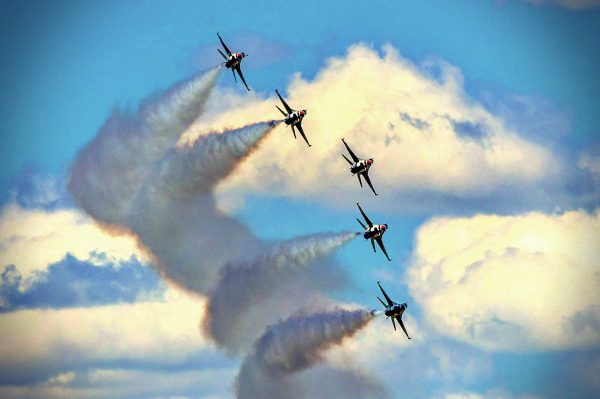 (f) Defenses.—
An accused may raise any applicable defenses available under this chapter or the Rules for Court-Martial. Marriage is not a defense for any conduct in issue in any prosecution under this section.
(g) Definitions.—In this section:
(1) Sexual act.—The term “sexual act” means—
(A) the penetration, however slight, of the penis into the vulva or anus or mouth;
(B) contact between the mouth and the penis, vulva, scrotum, or anus; or
(C) the penetration, however slight, of the vulva or penis or anus of another by any part of the body or any object, with an intent to abuse, humiliate, harass, or degrade any person or to arouse or gratify the sexual desire of any person.
(2) Sexual contact.—
The term “sexual contact” means touching, or causing another person to touch, either directly or through the clothing, the vulva, penis, scrotum, anus, groin, breast, inner thigh, or buttocks of any person, with an intent to abuse, humiliate, harass, or degrade any person or to arouse or gratify the sexual desire of any person. Touching may be accomplished by any part of the body or an object.
(3) Grievous bodily harm.—
The term “grievous bodily harm” means serious bodily injury. It includes fractured or dislocated bones, deep cuts, torn members of the body, serious damage to internal organs, and other severe bodily injuries. It does not include minor injuries such as a black eye or a bloody nose.
(4) Force.—The term “force” means—
(A) the use of a weapon;
(B) the use of such physical strength or violence as is sufficient to overcome, restrain, or injure a person; or
(C) inflicting physical harm sufficient to coerce or compel submission by the victim.
(5) Unlawful force.—
The term “unlawful force” means an act of force done without legal justification or excuse.
(6) Threatening or placing that other person in fear.—
The term “threatening or placing that other person in fear” means a communication or action that is of sufficient consequence to cause a reasonable fear that non-compliance will result in the victim or another person being subjected to the wrongful action contemplated by the communication or action.
(7) Consent.—
(A) The term “consent” means a freely given agreement to the conduct at issue by a competent person. An expression of lack of consent through words or conduct means there is no consent. Lack of verbal or physical resistance does not constitute consent. Submission resulting from the use of force, threat of force, or placing another person in fear also does not constitute consent. A current or previous dating or social or sexual relationship by itself or the manner of dress of the person involved with the accused in the conduct at issue does not constitute consent.
(B) A sleeping, unconscious, or incompetent person cannot consent. A person cannot consent to force causing or likely to cause death or grievous bodily harm or to being rendered unconscious. A person cannot consent while under threat or in fear or under the circumstances described in subparagraph (B) or (C) of subsection (b)(1).
(C) All the surrounding circumstances are to be considered in determining whether a person gave consent.
(8) Incapable of consenting.—The term “incapable of consenting” means the person is—
(A) incapable of appraising the nature of the conduct at issue; or
(B) physically incapable of declining participation in, or communicating unwillingness to engage in, the sexual act at issue.