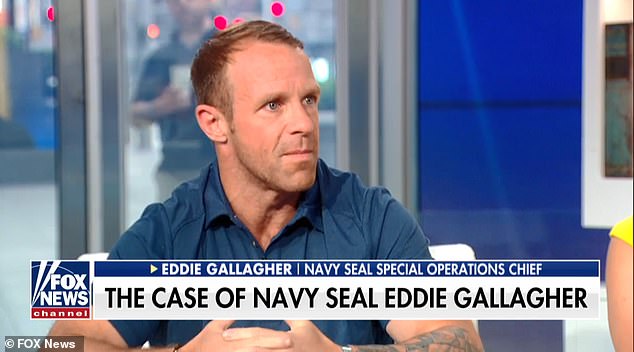 Navy SEAL Edward Gallagher said that the Navy still has ‘their thumb’ on him, despite having been acquitted of murder charges during his court-martial

The Navy SEAL who was acquitted of murdering a teen ISIS fighter while in Iraq said that he is still locking horns with the Navy, which has ‘their thumb’ on him.

Special Operations Chief Edward Gallagher’s court-martial in San Diego ended in July with a military jury acquitting him of fatally stabbing a captured, ISIS fighter, but convicting him of unlawfully posing for photos with the prisoner’s dead body while deployed in Iraq in 2017.

The decorated Navy SEAL was also found not guilty of attempted murder charges stemming from the wounding of two unarmed civilians – a school girl and an elderly man – who were shot from a sniper’s perch.

During an interview on FOX & Friends Weekend, Gallagher — who appeared on the show with wife, Andrea, and brother, Sean — said Saturday that the Navy is ‘looking at any reason to prosecute me right now’ and noted that ‘we are still in this fight, but we’re keeping our heads held high.’

Gallagher called the situation ‘surreal’ and said that he has ‘a lot of thoughts on the matter, but unfortunately I am still in the Navy, they still have their thumb on me.’

Gallagher’s wife, Andrea Gallagher, also appeared on the show, revealing the ways that the family is still being ‘terrorized’ by the Navy, despite having ‘trust the process, trust the system’ and won.

Sean Gallagher said that the Navy is ‘so mad they lost’ the case, that they’re now attempting to take out the anger on his brother.

‘The guy has been in [the Navy] 20 years, eight combat tours,’ Sean Gallagher said. ‘They are going to say [that] in 10 years when you need to go to the VA, you can’t do that anymore. That is what they are holding over us now.’

He added that all the family wants is to ‘retire peacefully [and] let Eddie and his family do what they have earned – live a normal life.’

Andrea Gallagher called President Trump ‘brilliant,’ when asked about President Trump’s support for her husband and recent directive to the Navy to strip the awards it had awarded to the lawyers who prosecuted, but lost, the case against the Navy SEAL.

‘The president has been brilliant in this,’ she said, noting that ‘He has seen so much similarity in what he’s gone through. I think that’s why he’s been so proactive.’

She went on to say that she thought ‘my husband has been villainized, he’s been smeared, lied about. And his own command has been consistently betraying him over this process. I want my husband home.’

Gallagher was sentenced to the maximum penalty of four months after being found guilty of posing for photos with the teen militant’s corpse. However, he will not serve jail time because he was confined longer than that period while awaiting trial.

The jury also sentenced Gallagher to a demotion in rank and pay for the crime of posing for pictures with a human casualty. His lawyers said they planned to appeal those penalties.