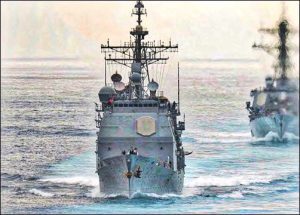 A Naval Academy midshipman has been found guilty of sexually violating three female classmates who were asleep after consuming alcohol in separate incidents in 2018 and 2019.

Prosecutor Lt. Cmdr. Paul LaPlante said Keago broke into the rooms of three female midshipmen while they were drunk and asleep. One of the women is now an ensign, reported The Capital Gazette.

LaPlante said Keago found midshipmen who he could control and when they woke up, Keago manipulated them into lying for him.

‘He found midshipmen who were vulnerable,’ LaPlante said.

While Keago was on active duty in February 2018 and October 2018, he went into two midshipmen’s rooms and had sex with them while they slept, according to court documents.

In the February incident, the prosecutor said Keago entered the victim’s room at the academy in Annapolis, Maryland, undressed her, then sexually assaulted her while she slept after a night of drinking.

Keago attempted to have sex with another midshipmen in May 2019, court documents said.

The two met at a bar in New York City during fleet week and did some shots together. Keago then offered to walk the woman back to her yard patrol boat, reported The Capital Gazette.

The woman, who is now an ensign, testified during Keago’s court-martial trial that on the walk Keago tried to put his arm around her, but she did not want him to do that.

When they got to the boat, the female midshipman told Keago to leave and went to bed, only to wake up later and find him near her bed.

She sent Keago away again, but he returned three more times.

The ensign that the midshipman repeatedly entered her sleeping area, got in bed with her, kissed her neck, pulled down her shorts and pressed his body against hers without consent.

Keago’s attorney, Lt. Dan Phipps, said his client deserved better because the investigation was fueled by rumors and incompetency.

Phipps said the rumors tarnished Keago’s reputation and also led the second and third victim to come forward with allegations.

Keago previously served four years as an enlisted US Marine. While serving in the Marines, Keago was a platoon sergeant, according to his LinkedIn profile.

His duties included training marines as well as ‘troop welfare’, his page stated.

He played on the All-Marine soccer team but was placed on a ‘leave of absence’ and later removed from the Naval Academy after the allegations came to light, a spokeswoman said.

He also represented Team USA at the 6th World Military Games in 2015 and was then assigned to Marine Corps Base in Hawaii.