Only On KFOX: Soldier Accused Of Prisoner Abuse Prepares For Trial

It is a case that has garnered national attention.

Sgt. Alan J. Driver Jr. will show up to Fort Bliss Wednesday morning for a trial that could determine the rest of his life. 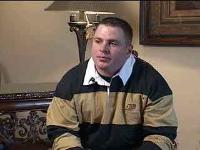 The Military Police Unit member is accused of abusing a top terror operative in Afghanistan.

In an exclusive interview with KFOX, Sgt. Driver spoke about the limited training he and his fellow soldiers received to carry out a job that turned out to be more than what their mission in Afghanistan was suppose to be.

“We didn’t train for it, when you deal with a prison situation, you need to train on how to handle prisoners” said Driver.

Driver is accused of assault and maltreatment while being assigned to Bagram Airbase in Afghanistan, home to one of the most heavily fortified military prisons in the world.

Driver, of the 377th Military Police Company, said he was trained to guard the perimeter of such detention facilities.

“That wasn’t the mission that we did over there” said Driver.

According to Driver, the mission at Bagram involved handling and sometimes interrogating prisoners, “We received one day of training on prison techniques before we arrived in the country and actually took over the prison in Bagram.”

On top of that, the soldier with 11 1/2 of military experience, said he dealt with Omar al-Faruq, a well-known al-Qaeda leader in Southeast Asia who escaped from Bagram in July of 2005.

While he could not provide details about his upcoming trail, Driver told KFOX that al-Faruq is the prisoner who he is accused of abusing.

Driver is the last of 11 soldiers from the Cincinnati-based 377th MP Company to be tried on charges of abusing detainees, including two who later died.

Driver acknowledged they had limited training.

“Nobody is perfect, there’s not a perfect soldier out there, um, and the soldiers that have been brought out there for these charges are good men, and they had to endure the most mind-boggling hardship that you can imagine for a military police officer,” said Driver, who maintains his innocence. “I’ll never say I did anything wrong. I’ll never say that. I did my job, I did what I was suppose to do.”

He believes it is due to the Abu Ghraib prisoner abuse scandal that he and others have recently been tried.

“I don’t think we’re scapegoats, I think that some unfortunate things have happened, like Abu Ghraib, that’s the forefront on everybody’s mind and I think as a result of that, they went through with these cases. Instead of prosecuting us, instead of taking to us, or trying to take us to jail, they should have asked us, ‘What was going on over there, went wrong over there and what can we improve, how could we have improved your training before you got there?” said Driver.

Copyright 2011 by KFOXTV.com. All rights reserved. This material may not be published, broadcast, rewritten or redistributed.