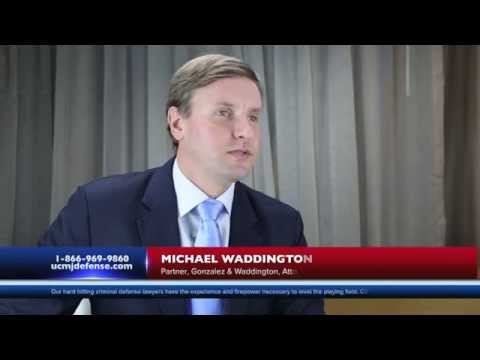 Below is a transcript from the YouTube video: Hiring the Best Military Lawyer – What Should I Do If Accused of a Military Crime

If you have been accused of a crime, then the military already believes you’re guilty. So they have people out there investigating prosecutors plotting and getting ready to charge you. So that’s the point time, or you need to get someone involved to represent you and advocate for your rights and tell you what to avoid doing and what to do to possibly get that case dropped before you’re charged.

It is considered the most important type of evidence because it is helpful to prove that physical, sexual contact has taken place and identify the perpetrator. This article will explore what types of DNA evidence are used in rape and sexual assault and how the defense can use them. As the use of DNA in trials becomes increasingly complex, those accused of rape or sexual assault will want to consult a sex crimes defense attorney who has experience in this process to ensure that there are no opportunities to be exploited to protect their rights and avoid criminal charges.

In cases where the rapist is unknown to the victim, investigators can submit DNA classifications of biological material seized at the crime scene to the Federal Bureau of Investigation’s database of DNA profiles of convicted offenders, unsolved crime scenes, and missing persons. Biological Evidence Collection Biological evidence and DNA studies are useful in ascertaining sexual contact and making suspicious identification. For example, in many sexual assaults, biological evidence left by the perpetrator (semen and saliva) is collected by a doctor in a standardized set of sexual assaults and analyzed for DNA.

In addition, the DNA collected must be known to everyone at the scene, including responding officers and witnesses, and you must have had consensual sexual intercourse within 72 hours. Once the DNA is taken, there are protocols for handling and using the evidence in the investigation.

Biological evidence such as sperm or blood

Biological evidence such as sperm, blood, vaginal secretions, saliva, and vaginal epithelial cells can be identified by the type of criminal laboratory. The information derived from this analysis can help determine whether sexual contact has happened, provide information about the circumstances of the incident, and compare it to reference samples taken by the patient or suspect.

In the United States, the investigation of rape cases is slow, largely because of the difficulty of obtaining DNA results from the evidence of sexual assault (SAKS). There is no doubt that DNA technology can strengthen investigations and prosecutions in sexual violence cases. However, there is a need for training in collecting and preserving evidence, which is an important shortcoming.

When law enforcement investigates cases of sexual assault, DNA evidence can affect or break the outcome. As a result, the judiciary relies heavily on various types of evidence to link suspects to crime scenes, victims to sexual assault cases, and forensic evidence used to corroborate or refute allegations of fact. Other evidence that can be used along with DNA evidence includes evidence of injuries consistent with rape or sexual assault, phone records, texts, social media posts, and interviews with potential witnesses.

Trained investigators will search for DNA traces at locations relevant to the case, such as the crime scene. Evidence gathered at the scene, and medical examinations of the victim are also crucial to obtain DNA evidence to identify the perpetrator.

DNA evidence can be collected on the body or clothing of a person who has survived an attack or sexual assault during a forensic examination. In most cases, victims’ clothing is searched for evidence of a crime in the hospital.

If the attacker is unknown to the victim, the rape kit returns with usable DNA, and the DNA profile is entered into a large database of FBI profiles called CODIS to try and identify the suspect. If the copy is meaningful, it is matched with a reference sample, which means that the suspect can be identified, making DNA evidence relevant in cases of gang rape and conflict-related violence in which the perpetrator is unknown.

DNA evidence cannot further determine whether sexual contact was consensual, which is one of the most controversial issues in cases of gang rape or conflict-related violence where the perpetrators are often unknown. Biological evidence such as semen may indicate that sexual intercourse has occurred, but this alone does not constitute rape. Many cases of sexual violence are based on first-hand accounts and other evidence that does leave room for interpretation.

In addition to the problems with DNA evidence, cities, states, and the federal government often focus so much on proving a sex crime when pursuing sexual assault cases that the analysis tends toward prosecution. Inconsistencies in state policy have led to incomplete information from law enforcement agencies and a lack of knowledge from survivors, who often do not expect that the evidence collected in their cases will not match reality.

The NAESV supports state and federal policies and laws that require forensic examination kits reported in sexual assault cases to process DNA and other evidence within a reasonable period. Results are recorded in state and national databases.

Tests for SAHs and forensic DNA samples can help connect the dots and give a complete picture of an offender’s behavior than what is documented in criminal records. Testing sexual assault kits (SACs) to examine the rate of DNA matches in cases provides a new way to investigate repeat crimes. However, policies should be considered for reporting DNA matches in older cases, and protocols should be developed that are victim-centered and sensitive to the impact of contact with rape survivors many years later.