Both Sides Rest in Court-Martial of SEAL Chief Gallagher

The final witness said he’s been a close friend to Special Operations Chief Edward Gallagher for close to 10 years.

By NBC 7 Staff and Associated Press

The final witness testified Friday in the court-martial of Navy SEAL Chief Edward Gallagher after he was granted immunity by the judge.

Lieutenant Commander Robert Briesch told the court he’s been close friends with Chief Gallagher for about 10 years and has served alongside him on multiple deployments. he told the court he wants the truth to come out.

Gallagher, 40, has pleaded not guilty to murder and attempted murder in connection with allegations he killed a captive and injured teenage Islamic State fighter in Iraq in 2017.

Briesch told prosecutors he had heard only rumors about Gallagher and possible criminal acts in Iraq until April of 2018 when he heard evidence that substantiated a preliminary investigation. He said that when he realized the allegation was credible he started an investigation. 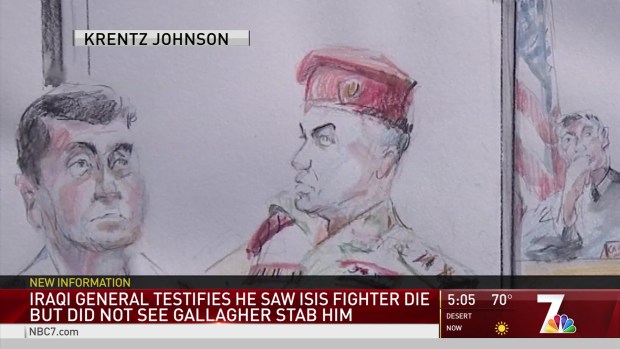 An Iraqi General came to the defense of a San Diego based Navy Seal accused of murdering an ISIS prisoner in 2017. NBC 7’s Rory Devine has more.

The witness recalled possibly hearing about a photo Gallagher took with the dead fighter during a reenlistment ceremony before that time, but considered it a rumor and didn’t think anything more of it.

According to Briesch, Lt. Jacob Portier, who is accused of covering up Gallagher’s alleged war crimes and faces court-martial in September, told him the picture had been destroyed so Briesch didn’t follow up. He also said that Gallagher addressed the rumors with him and said he wanted to start an investigation of his own so he could clear his name.

Briesch said a captain who had a personal issue with Gallagher made the original complaint that launched the criminal investigation. That captain, according to Briesch, claimed Gallagher’s career was based on lies around the same time it was announced Gallagher would be receiving the Purple Heart and Bronze Star.

Briesch said that when Gallagher was promoted was to Senior Chief, the same captain complained and said Gallagher didn’t pay for a haircut, stole food from him and that he didn’t like him.

Briesch said if the captain hadn’t complained, no one would have been in court that day.

The prosecution and defense both rested following Briesch’s testimony. Closing arguments are planned for Monday morning.

The witness who dropped a bombshell that he was the one who killed an Islamic State prisoner could now face perjury charges. NBC 7’s Bridget Naso has more.

“No matter how much preparation the government has put into this case, the one thing they can’t get over is the fact that Eddie Gallagher is not guilty. So now that all the evidence is in, we’ll take the weekend to prepare for closings and Monday morning, hopefully the jury will get this case and then we’ll get the verdict,” Gallagher’s attorney Tim Parlatore said.

On Thursday an Iraqi general who fought alongside Gallagher’s platoon in Mosul, Iraq testified that he was there from the moment the fighter was taken captive to the moment he died, but did not see Gallagher stab him.

The general described the fight in May 2017 against the Navy SEALs and what he described was about 50 ISIS fighters. All were killed except one, the teenager who was wounded and taken captive by the SEAL team.

Al-Jubouri testified he was in the room with Gallagher and the other Navy SEALs who were giving the fighter medical treatment.

What he didn’t see, he testified, was Gallagher stab the soldier in the neck.

“I did not leave the room until the bad guy died,” Al-Jubouri said. When asked if he was sure the fighter was dead, he replied, “Well there was no movement, nothing, no breathing.”

In a shocking twist, a witness confessed to the killing of an ISIS fighter during the trial against Special Operations Chief Edward Gallagher. NBC 7’s Nicole Gomez has more.

The general also said that the SEALs knew that he wanted the fighter alive so that he could question him about intelligence.

Prosecutors poked holes in Al-Jubouri’s testimony, questioning why he had made a video in defense of Chief Gallagher after he saw that he was facing court-martial.

The prosecution also questioned why the general’s details in the video didn’t line up with the details he told on the stand. For example, in his video, Al-Jubouri said there was internal bleeding; on the stand, he testified the fighter had been shot in the leg.

Parlitore explained the internal bleeding came from injuries to the fighter’s lung that came from a “blast” during the gun battle.

Other witnesses have said they saw Gallagher stab the wounded Islamic State captive in the neck and shoot at two civilians during his 2017 tour in Iraq.

One SEAL, Corey Scott, testified that he, in fact, actually killed him by plugging his breathing tube. Scott said he thought the boy would survive Gallagher’s stabbing and wanted to spare him being tortured by Iraqi forces. 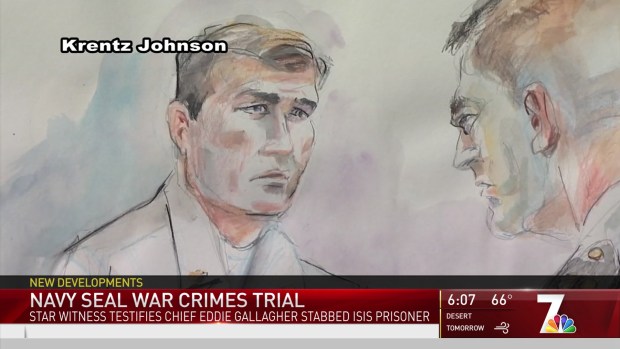 Prosecutors said Scott had never mentioned the asphyxiation in multiple conversations with them before the trial. Scott said they never asked him the cause of death. He may now face perjury charges.

The defense has repeatedly argued that Gallagher was being framed by tainted or even false evidence.