by Diana Stancy Correll with the Army Times
August 28, 2020 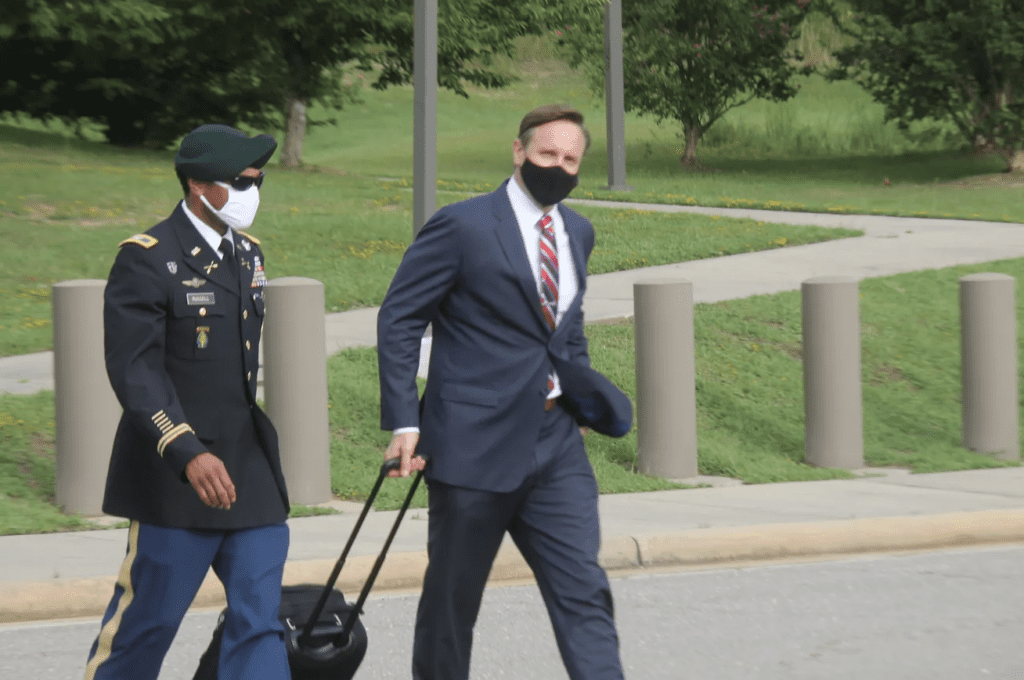 “We are pleased with the verdict,” Waddington said in an email to Army Times. “Colonel K.R. is innocent. He had faith in the system. He had faith in his attorneys. In the end, the truth came out.”

According to the Fayetteville Observer, a woman who was then an Air Force captain accused K.R. of raping her on June 5, 2015. The woman, who testified during the court-martial, claimed the two started a sexual relationship in April 2015 while they both were deployed to Pakistan.

The following month, after the married K.R. headed to Jordan on a temporary assignment, the woman started a sexual relationship with K.R.’s housemate, a married captain. Even though the woman continued to keep in contact with K.R. while he was in Jordan, she said she tried to dodge seeing him once he returned to Pakistan later that month.

She claimed this was because of K.R.’s rank, his marital status and her desire to conceal her relationship with his housemate.

“After sex with him, I lost interest,” the woman testified, according to the report in the Observer. “I didn’t enjoy our sexual interaction. … I thought he was a nice guy,”

Even so, she said she “didn’t have the courage to cut things off” with K.R., who later learned of her relationship with his housemate, the captain. All three eventually discussed the matter, she said, and the captain later told her that he and K.R. had agreed to independently “pursue her,” the Observer reported.

Afterwards, she testified that she attempted to avoid K.R., but accepted an invitation to go to dinner with him on June 5, 2015, so she wouldn’t offend him. During dinner, she said she only had two sips of wine.

Although the woman testified she was usually capable of downing approximately two bottles of champagne, or five to six alcoholic beverages in a night, and still remember an evening, she doesn’t remember portions of June 5 despite consuming only two alcoholic beverages the entire night. As a result, she believes she was drugged after she, K.R. and the captain met up with a friend at a place called the French Club. Things “became blurred” after K.R. handed her a drink on the dance floor, she said.

“I remember waking up to Col. K.R. having sex with me,” she said. She claimed she exited K.R.’s room and headed straight for the captain’s room. The next morning, she said she had consensual sex with the captain. She also asserted she had a “lost sense of self” following the events on June 5, and struggled with suicidal thoughts afterwards. The woman filed a restricted sexual assault report in January or February 2016, but removed the restriction in April 2019, prompting an official investigation, she said.

A female lieutenant colonel, who also was in Pakistan during 2015, submitted a statement claiming the woman disclosed she had been sexually assaulted between October 2015 and the end of the year. But K.R., who had a different recollection of the events on June 5, denied drugging the woman or raping her, the Observer reported. K.R. testified that although he and several others went to the French Club, the woman did not appear drunk, nor did she appear drunk when they and the captain went back to the men’s home, he said.

Although the three went to separate bedrooms, K.R. claimed the woman later joined him in his room, initiated foreplay, and undressed herself before they slept together. K.R. again said the woman did not appear drunk during the incident.

After they had sex, the woman said she was going to the captain’s room — a statement K.R. said he found odd at the time. However, nothing seemed amiss the next day when he saw the captain, and the woman made no mention of a sexual assault in subsequent interactions shortly thereafter, he testified.

Both K.R. and the woman confirmed they had sex on three separate occasions after June 5, before K.R. returned to the U.S. — including the day in July when K.R. headed to the airport to leave Pakistan, the Observer reported. The woman acknowledged all three of these episodes were consensual.

K.R. testified the woman remained in contact with him even after he returned to the U.S., but said he was not informed of any sexual assault allegations until 2017.

After serving in the Army for 28 years, K.R. plans to retire, said Waddington, his attorney. K.R. is assigned to U.S Army Special Operations Command, and previously served with U.S. Southern Command’s Joint Task Force-Bravo and as a special operations liaison to U.S. Central Command.