By ANTONIA PAGET FOR MAILONLINE

A high ranking Army officer sexually assaulted a colleague’s wife by squeezing her bottom while she was at hospital with her injured son, a court martial heard today.

Lieutenant Colonel Gordon Edwards is accused of ‘trying his luck’ with his friend’s wife, believing he could ‘get away with a quick grope’.

The respected officer, 59, was queuing with the woman at a hospital coffee shop when he allegedly ran his hand down her back ‘over her left buttock, and squeezed her right buttock’.

Bulford Military Court, Wiltshire, today heard the woman and her husband – who Lt Col Edwards was friendly with – ‘had a lot on their plate’ already as their young son had been in a serious accident. 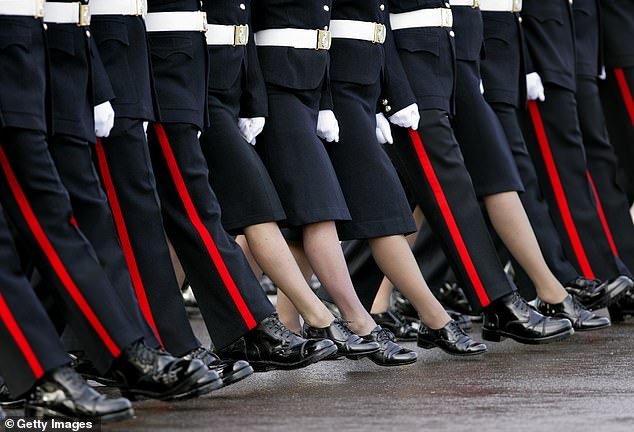 Bulford Military Court in Wiltshire today heard how Lieutenant Colonel Gordon Edwards allegedly sexually assaulted a colleague’s wife by squeezing her bottom while she was in hospital tending to her seriously injured son (pictured: stock image of British soldiers)

The alleged victim said his grope ‘took advantage of my vulnerability.’

Giving evidence, the soldier’s wife said: ‘He ran his hand across the small of my back from left to right, down on my right bottom cheek and squeezed.

‘It was a proper grope on my bottom… I was completely and utterly shocked.

‘I was at my most vulnerable, my son had nearly been killed.

‘It was not like I was at a party having a good time.

‘I couldn’t believe someone of that stature would do that at that time.

‘My son was critically ill, I was in disbelief.’

When confronted by his colleague Lt Col Edwards said ‘sorry mate I didn’t mean anything by it’.

Bulford Military Court, Wiltshire, today heard the alleged grope led to a bitter and long-lasting row between the two soldiers, with ‘public fallings out’.

Lt Col Edwards, of the Defence School of Electronic and Mechanical Engineering at MoD Lyneham, Wilts, denies one count of sexual assault following the incident in 2018.

Prosecutor William Peters today opened the trial at Bulford Military Court in front of a panel of five Army officers.

Mr Peters said: ‘The prosecution’s case here is all about the defendant taking a liberty with the wife of a colleague by intentionally squeezing her buttock in highly inappropriate circumstances.

‘[The alleged victim] was visiting her young son in hospital.

‘Lt Col Edwards knew them well and there was a working relationship with [the alleged victim’s husband]. He visited the hospital on a welfare check and was in uniform.

‘[The alleged victim] and Lt Col Edwards left the ward for a coffee and got a lift to the ground floor.

‘While queuing, Lt Col Edwards took that liberty. While standing side by side, he ran his palm across the small of her back, over her left buttock, and squeezed her right buttock.

‘She was wearing black leggings and felt every move. It was a deliberate touch.

‘Feeling shocked and angry, she took a pace away from him. They went back to the ward and when the opportunity arose she told her husband what had happened.

‘When Lt Col Edwards came back, [the husband] asked him what he thought he was up to. Lt Col Edwards brushed it off and said ‘sorry mate I didn’t mean to do it’.’

Mr Peters said the married couple were ‘angry and confused’, adding: ‘They already had a lot on their plate with their son being in hospital.’

In cross-examination, barrister Naomi Gyane, defending Lt Col Edwards, suggested the woman was in a ‘heightened emotional state’ and ‘confused’ what actually happened.

But, the woman said: ‘I was in full control of my mental state. He took advantage of my vulnerability.’

The court heard how Lt Col Edwards was visiting the couple in hospital while they tended to their ‘critically ill’ son (pictured: Bristol Children’s Hospital)

The hearing was told the incident led to tensions spilling over at work in ‘public fallings out’.

He said the officer didn’t find the time to formally raise the complaint at work but the continued dispute between the pair led to the husband’s behaviour being investigated.

When Lt Col Edwards was interviewed by Royal Military Police in June last year, he denied the allegation.

Mr Peters said: ‘He said there was no way on earth that he touched her in the way she alleges.

‘This was Lt Col Edwards trying his luck in the hospital thinking he could get away with a quick grope. She saw his actions for what they were.’

The Defence School of Electronic and Mechanical Engineering (DSEME), at MoD Lyneham, is part of the MoD’s Defence College of Technical Training (DCTT).

The school gives soldiers technical training on a number of disciplines. Soldiers are trained to become recovery mechanics, armourers and metalsmiths.

The school moved onto the site in 2015 following a £121 million revamp.

MoD Lyneham had been closed for three years, having been used up until 2012 as RAF Lyneham.