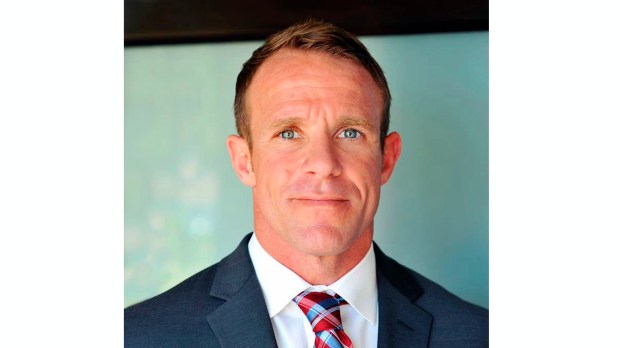 This 2018 photo provided by Andrea Gallagher shows her husband, Navy SEAL Edward Gallagher. The decorated Navy SEAL is facing charges of premeditated murder and other offenses in connection with the fatal stabbing of a teenage Islamic State prisoner under his care in Iraq in 2017 and the shooting of unarmed Iraqi civilians. His attorney says he will plead not guilty to all the charges at a Naval hearing Friday, Jan. 4, 2019, in San Diego. (Andrea Gallagher via AP)

Seven Navy SEALS have been granted “testimonial” immunity and are expected to testify against their former teammate, a Navy SEAL chief, who will stand trial accused of murdering a teen ISIS fighter, Navy officials confirmed on Tuesday, Jan. 30.

Chief Edward “Eddie” Gallagher, a highly decorated Navy SEAL and special warfare operator, is expected to go on trial Feb. 19 at a court-martial at Naval Base San Diego.

Gallagher, 39, a decorated SEAL who was arrested Sept. 11 while he was being treated at Camp Pendleton’s Intrepid Spirit Center, pleaded “not guilty” to all war crime charges he is accused of committing during a 2017 deployment in Iraq, said Phillip Stackhouse, a San Diego-based attorney and Marine veteran who is defending Gallagher.

On Jan. 4, Gallagher was arraigned on charges of premeditated murder and assault with a deadly weapon in the May 3, 2017 incident. Stackhouse had asked that Gallagher be released from pre-trial confinement at the Miramar brig. Rugh made the decision Jan. 10 to deny the request.

Gallagher, who has served in the Navy for 19 years, is accused of premeditated murder in the fatal stabbing of a 15-year-old ISIS fighter, according to the prosecution. He also is accused of posing with the corpse while taping a reenlistment video. At the time, he was serving as a medic with Naval Special Warfare Group One based out of San Diego.

Gallagher is also charged with shooting a man in June 2017 and a woman in July of that year, both civilians classified as “noncombatants,” according to the charge sheets.

Navy prosecutors also are charging Gallagher with obstructing the investigation once his unit returned to San Diego.

Lt. Jacob Portier, a Navy officer who supervised Gallagher’s platoon, was charged with various offenses tied to the case on Jan. 22, including allegations he conducted the SEAL’s alleged battlefield reenlistment ceremony and encouraged enlisted personnel to pose for photos with the corpse.

Portier’s attorney, Jay Sullivan, said his client will plead not guilty to all charges at a later date, which is allowed under military court rules. He said Portier, who was the officer in charge of Gallagher’s platoon during the deployment, is innocent. He also said the re-enlistment ceremony was done legally in a war zone where there may have been casualties nearby.

Sullivan said it will come out in trail that the Islamic State fighter was killed in combat operations and Portier was not there.

Rugh has scheduled another hearing for Feb. 12, this one to discuss three motions that could not be heard Friday, O’Rourke said.